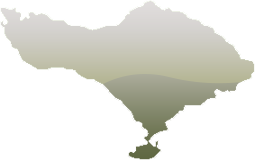 Nature has generated compost on the earth’s surface for nearly 400 million years. Compost supplies humus to the top soil and facilitates plant growth. Composting is not a high-tech process, but nevertheless, large scale aerobic composting involves many technological challenges, some are addressed in this section others only in the section Lessons learned.

Europe and the USA have a convention that only the product of aerobic decomposition may be called compost. Hopefully, Indonesia will follow this convention.Anaerobic products are of inferior quality and may only be called soil conditioners for reasons explained in the section Our compost.

Since 2004, research was conducted to understanding large scale composting under tropical conditions with tropical raw material. Understanding the process has led to specific process features that vary from the common Western approaches.

The delivered waste is separated into organics (85%), other recyclable material (5%) and residue (10%). Organics are processed according to an ISO 9000 type quality system which assures a standard procedure yielding stable high quality compost. Of the average 50 tons of daily processed waste 42.5 tons is organic waste that can be turned into about 15 tons of high quality compost.

Large blowers force air into the organic waste piles, which are watered, mixed and loosened up to maintain optimal conditions. The oxygen content is kept at around 12%, while the moisture content is kept at 40 to 60%. Active aerobic microorganisms produce heat during the decomposition process. The temperaturereaches over 70 °C, which sanitizes the compost, i.e. makes it free of weed seed, insect eggs and larvae or pathogens like E. Coli.The project has all the necessary instruments to measure temperature, water and oxygen content electronically.

The delivered waste is so high in organics and low in other recyclable material because the waste is pilferedof valuable components by scavengers before it reaches the facility, a nuisance that can also happen elsewhere. This cherry picking puts a heavy burden on the profitability of the facility. Another issue that burdens the profitability is the high subsidies for chemical fertilizers, which amount to about 90%. This makes it virtually impossible to access the huge rice farming market.

Because of these subsidies, the cherry picking by scavengers and the absence of tipping fees, the facility can cover only about 50% of its operating costs. The remaining 50% are covered by CDM Carbon Credits.

The production of compost results from the interaction of microbes with organic material, oxygen and water. Because composting is an aerobic process (needing oxygen), it can only occur when enough air is available. If layers of organics are thicker than about 60 cm, the decomposition process becomes increasingly anaerobic (without oxygen).

The criterion to keep the composting process aerobic isan oxygen content of more than 6% and a water content of 40 to 60%. Below a content of 6% oxygen and over 60% water the process becomes anaerobic. Below 40 % water content microbial activity ceases.

During the composting process about 65 % of the organic material is digested by microbes. Glucose (C6H12O6) is commonly used as a model for the aerobic microbial decomposition:

The remaining 35 % of the organic material is not digested and becomes compost. With the help of oxygen, microbes produce first highly soluble and colored fulvic and humic acids that react later to less soluble humic compounds, the basis of humus.

The prevention of methane, which is a 25-times stronger greenhouse gas than carbon dioxide, makes aerobic composting eligible as a Clean Development Mechanism (CDM) project under the Kyoto Protocol.

The project is faced with the challenge to process daily about 42.5 tons of organic waste into high quality compost. Aerated composting can be done in windrows or in a table pile.

Windrows need a lot of space and have the disadvantage of a two-dimensional airflow, when aerated from a central air pipe. In such windrows, air speed and supply decrease 20-fold with every meter distance from the pipe. Composting tables need less space and the air flow is close to a one-dimensional laminar flow, resulting in more homogeneous pile conditions. In the Gianyar, the compost table is 3 to 4 m high, 30 m wide and up to 100 m long.

Compost tables also have the advantage that they allow a semi-continuous composting process, while windrow composting is a batch process. By the regular turning sections of the compost table in one direction, the organic matter is moved from one end where new shredded organic matter is added to the other end where finished compost can be removed.Because of the soft ground (the facility was built on an old landfill),the project uses an excavator the periodic turning of the composting piles.The graph below, illustrates the semi-continuous table process. 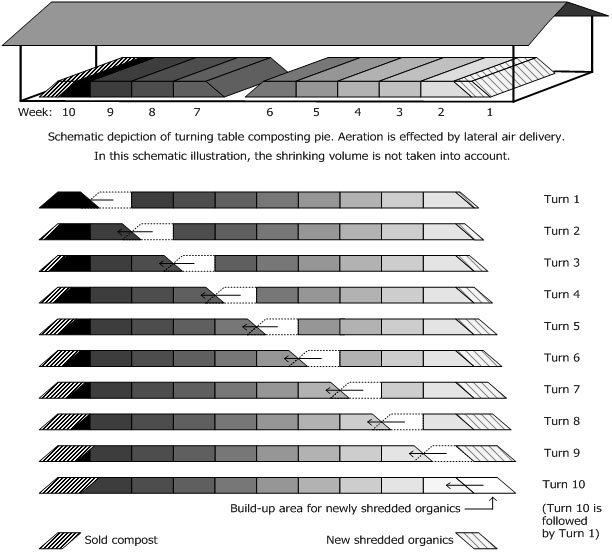 The air requirement is very high during the first very active composting phase of about 30 days while the organic matter is digesting rapidly, but later drops when the compost is curing. The capacity of the blower and duct system is calculated based on the specific air requirement. Radial blowers should be used as they don’t create a back surge when the backpressure increases.

During the whole processing cycle, the organic matter is shrinking and loses weight. The shrinkage and weight loss depend on the raw material composition and the conditions during decomposition process, especially what the heat is concerned.

Typically, shredding reduces the volume of the delivered organics waste to about 50 %. However, depending on circumstances, only partial shredding is indicated. The volume decreases further to about 23 % during the composting process. Therefore, the finished compost has only about 12 % of the volume of the delivered organic waste. The weight also drops to about 35 %. Thus, the daily 42.5 tons or 183 cubic meter of organic waste are processed into 15 tons or 25 cubic meter quality compost.

Below, the aeration system can be seen with the blower, supply ducts and air outletsthat are 2 meters apart. The plant layout is determined by the material flow and – to protect the workforce – the prevailing wind directions. 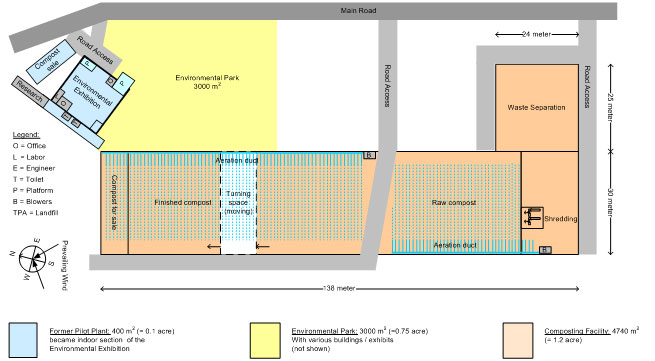